The MJ Live Show Las Vegas is one of the most entertaining tribute concerts that a person can view while visiting Sin City.

This 75-minute stage production highlighting the great career of Michael Jackson will take you through a musical journey that will have you moon walking in your seat. The tribute artists are masterful in their dance moves and singing with performances that bring the magical King of Pop back to the stage in a realistic impersonation that leaves guests wanting more.

At the start of the show there are a few throwback songs from Michael’s days with his brothers in the Jackson 5. Songs like ABC gets the audience in the mood and I Want You Back is complete with Michael’s early spin moves that helped propel the group up the charts. From the early days to the riveting dance choreography which has dancers in unison on hits like Thriller and the moonwalk on Billie Jean is very authentic. From Beat It to Black and White guests have been amazed at the performance of the tribute artists who walk the audience through all of Michael’s special moments during his rise to being the King of Pop.

During MJ Live Show there is an eight person dance troupe that is spectacular in their synchronized moves with each other, the tribute artist and the music of the King of Pop. Members of the four piece band who perform during MJ Live are talented at their profession and stay on top of the beat in every song. With only four pieces there are parts of the music that are taped like a horn section and the backup vocals are occasionally dubbed behind the perfect voice impression of Michael by the tribute artist. 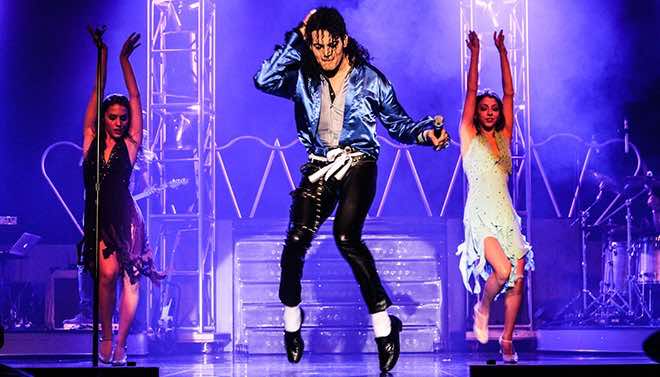 The stage effects are enhanced by a dedicated staff that includes a choreographer, producer, lighting director and musical director. The multimedia effects are mixed perfectly with lighting that intertwines with the prowess of the dancers to bring the show cohesiveness. The wardrobes worn by the dance troupe are unique. The tribute artists that impersonate Michael have no problem switching from a white suit with a bolero to the signature look of the torn white t-shirt and white glove. From leather studded jackets to sparkling suit blazers to white socks and penny loafers the choreography of the costumes is right on target.

The venue at the Stratosphere Theater is intimate with less than 650 seats available for each performance. With limited seating guests can be assured of an up close and personal performance by the tribute artists. MJ Live is the perfect stage show for patrons to fantasize about the King of Pop still dancing up a storm and the real only complaint is the show is too short, much like Michael’s time on earth.

There are several tribute artists that portray Michael Jackson on stage and the artists rotate performances. The supporting cast also consists of a choreographer, musical director, producer and lighting director.

Two of the most acclaimed impersonators are Jalles Franca and James Times III. Jalles Franca has been perfecting his dance skills since he moved to Las Vegas from his home country of Brazil at the age of sixteen. On his quest to be a Las Vegas dancer and entertainer Jalles began dancing at many sponsored appearances at various nightclubs in the Sin City including Studio 54 at the MGM Grand Hotel and Casino. Jalles astonished nightclub patrons with his ability to perform Michael’s signature moves with ease. Jalles has won many contests with regards to impersonation of the King of Pop. Jalles is known around town as MJ The Legend.

James Times III has stepped in the spotlight as MJ with his stunning performances during MJ Live. James grew up in Miami with the aspiration of being an entertainer. He studied dancing, music and singing starting at a young age. James is very similar to Michael in real life appearance and all of his dance moves are self-taught. He has studied hours of film and video of Michael to ensure that each movement is authentic and genuine. James has a unique quality in impersonating the mannerisms of Michael throughout the MJ Live show. On a whim James sent a video of himself to the producers of MJ Live and was offered a position in the show.

The choreographer of the MJ Live Show is Missy Cochran who has worked herself up the ladder in Las Vegas while starting as a dancer at the Aladdin Hotel and Casino. She would later graduate from UNLV and continued to perform while touring with the New Kids On The Block. Missy’s life on the production end of the spectrum started with fashion shows and corporate sponsored events which have bolstered her knowledge of choreography. 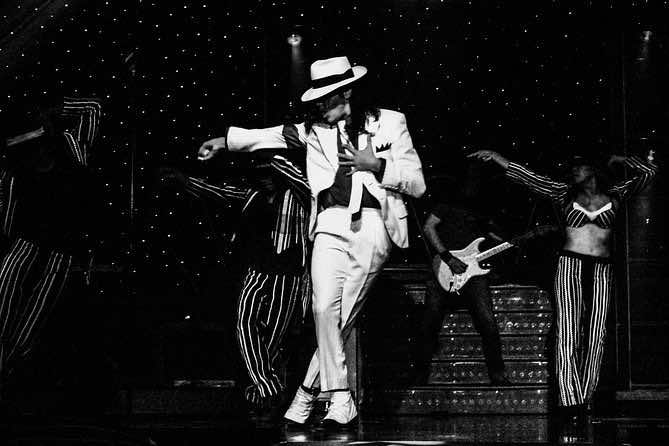 Lighting design is conducted by David Schulman. Born in Miami, Florida, David would later graduate from the North Carolina School of the Arts and New York University. While studying in New York he honed his skills on such productions as Sweeny Todd and Crazy for You. His most recent work on The Rat is Back has been highly acclaimed.

The producer is Dick Feeney who has over four decades of experience with 32,000 Las Vegas show performances under his belt. Feeney grew up in the Boston area practicing his skills as a dancer, musician and singer. He arrived in Las Vegas in 1985 with the opening of Crazy Girls and Feeney went on to produce Viva Las Vegas which ran at the Sands Hotel and Casino for over eighteen years. In 2008 Feeney was inducted into the Las Vegas Walk of Stars.

Gene Sironen gives musical direction in the show. He has been instrumental in many musical shows that have toured the world from 1978 to present. Gene began honing his skills as a performer, conductor, arranger and singer since childhood. He has been fortunate to collaborate with such greats such as A. C. Cuilla and Andy Blankenbuehler. After arriving in Las Vegas Gene has been the music director for noted choreographers such as Gail Davies Joey Doucette and Donny Moore. 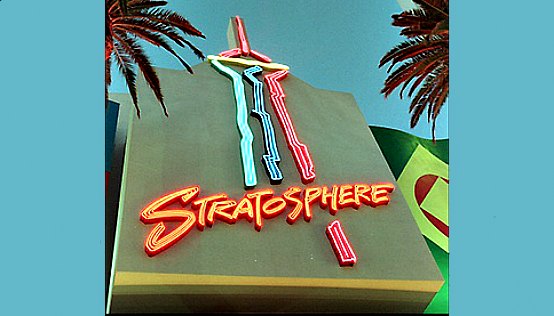 MJ Live Show Las Vegas is performing at Stratosphere Theater located within the Stratosphere Hotel and Casino. The MJ Live has excellent lighting and multimedia effects as well as a state-of-the-art sound system. Sight lines are good in this intimate theater that features table and booth seating. The tribute show runs nightly at 7:00 P.M. and is open to guests five years of age or older with a parental guardian. MJ Live Tickets are on sale for general admission to an impressive VIP booth.