Here is a list the best shows in Las Vegas that you can see in 2021! With so much going on in the city and so many cool things to do and see, it may be hard to decide, especially if you have only a few days to explore the city.I have checked out reviews of all permanent shows playing in the Sin City, and am happy to present you with my reviews of the best ones. Keep reading to find out about the most popular shows In Vegas right now!

If you enjoy live music, there's always plenty of concerts playing all over the Strip. Some play every day, but many only have short time engagements. Here are the most popular best shows in Las Vegas in the music genre, hopefully you can catch them while you are here!

Las Vegas is home to Cirque du Soleil, which is currently performing 8 different shows practically every night! 6 of the shows are a great fun for adults and kids alike. Our top picks for best Cirque du Soleil shows to see in Las Vegas are Mystere, O, and Ka. 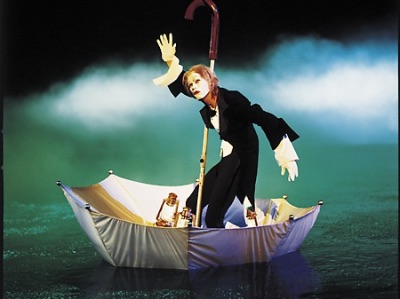 Review: O is all about fire and water imagery. It's one of the most beautiful, best Vegas shows, featuring skyrocketing and diving acrobatics. Instead of a regular stage, the action is going on in a large water tank. The imagery is incredibly beautiful, something like a mixture of fire and water - after all, the name O is derived from the pronunciation of the French word "Eau", meaning "Water". According to thousands of user reviews, O is one of the most beautiful Cirque du Soleil shows. Many think that O is THE best show in the Las Vegas, ever! 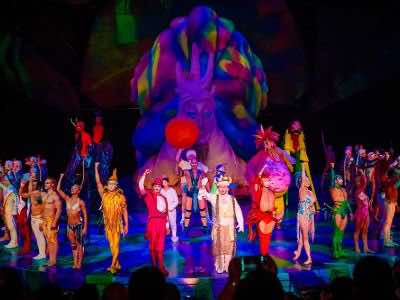 Review: A colorful highly visual show filled with mysterious creatures, performing impossible acrobatics - fun for the whole family. While Mystere does not have a "story" like, for example, Ka - it compensates for it's lack fully by bright costumes, synchronized acrobatics, and impossible tricks. Mystere is among the best shows in Las Vegas for a family vacation - plus, it's more affordable than the O show reviewed above. 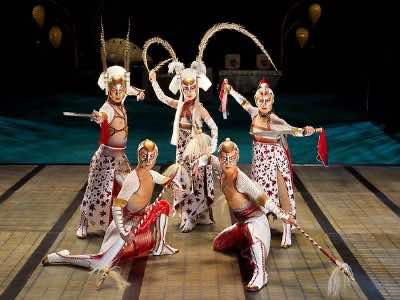 Review: Ka is a very impressive show that combines acrobatics, martial arts, dance, gorgeous costumes, pyrotechnics and everything you expect from a Cirque du Soleil show. Ka tells a story of separated twin brother and sister who are coming of age and have to undergo ordeals before they can reunite. conducted on a huge stage that can tilt and move, this is one of the most impressive, large-scale best shows in Las Vegas.

In Vegas you can find comedy shows in all genres: from improvisations to physical, from surreal to stand-up style. Any modern American comedian can be considered successful if he had at least one performance in Vegas! Some artists are so good that they are invited to perform regularly in the city. Here is a list of my favorite best shows in Las Vegas in the comedy genre. 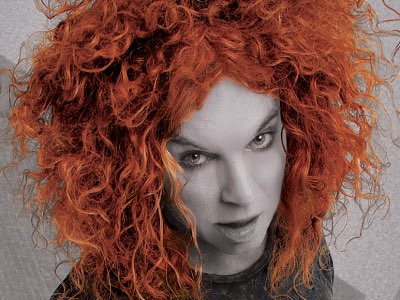 Review: This show is a mixture of stand up comedy and prop comedy - curly red haired Carrot Top uses unusual props and makes fun of himself, of the human nature and of the American culture among other subjects. If you need a good laugh, this is the place to go! Along with Mystere, Carrot Top tops my list of the best shows in Las Vegas in 2021 in comedy genre. 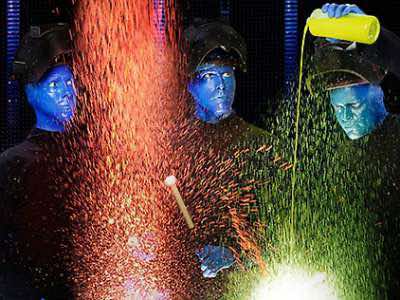 Review: 3 bald and blue men perform visually stunning acts that are a mix of comedy, rock music and modern technology. If that doesn't impress you, you should know that this show is simply hilarious, energetic and very different from everything else you've ever seen. The Blue Man Group performs truly one of the most spectacular, top shows in Las Vegas! 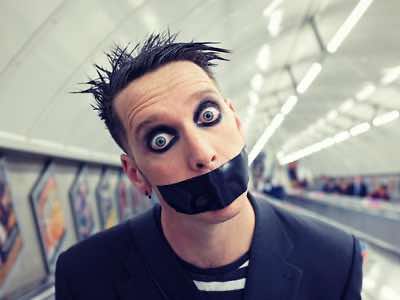 Where: House of Tape, Harrah's

One of the more unique, intriguing, best shows in Las Vegas for you to see is the amazing Tape Face. Performing at the House of Tape within Harrah’s, the show is the delightful creation of Sam Wills who even made Simon Cowell smile on America’s Got Talent. Tape Face brings nothing but laughter to the stage with his actions that make the audience smile and wonder in bewilderment. As he stands on stage your first thought is he is a mixture of terror and horror like Mike Meyers but in the end you will be rolling in the aisle with tearful laughter. He brings his experience from Clown School into play when he transforms the stage into a three ring circus that only he can control. Don’t be scared when you get the evil eye and don’t be shy if he calls you up on stage to have fun.

We know you want to see an adult show! After all, this is Vegas! While there is no lack of adult entertainment in Vegas, not all of them are created equal. We've checked out many adult shows and would love to recommend the following shows.

Thunder From Down Under 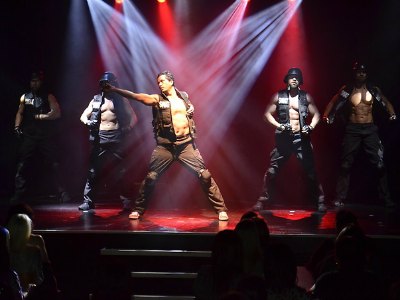 Where: Thunder From Down Under Theatre - Excalibur Hotel & Casino

Review: Thunder From Down Under is a true delight! The show features all Australian male dancers, and will make a great girls night out or a bachelorette party! Girls, the guys are so yummy you shouldn't drag your boyfriends or husbands into this! And in case you are wondering, the Thunder guys will let you touch anything...yes, anything...It's one the two best shows in Las Vegas in 2021 for bachelorette parties, with the other being Chippendales! 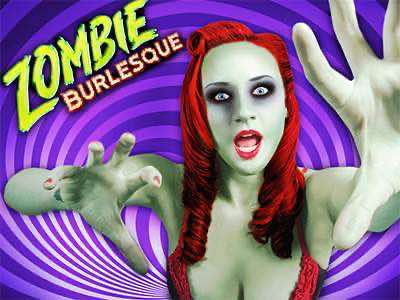 Where: V Theater at Planet Hollywood

Everyone needs to prepare themselves for an evening of risqué costumes, jokes, music and dancing when you go to see Zombie Burlesque. This tantalizing show will put a smile on your face as you watch the high flying aerials and antics of flesh eating monsters that bring more than just a sexy show to the stage. After witnessing this superb performance of improvisation and crudeness you will now you saw one of the best shows in Las Vegas in 2021. 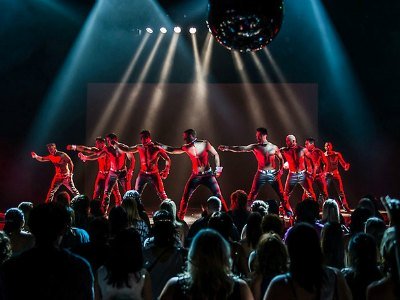 Review: Chippendales are in direct rivalry with Thunder From Down Under...We really don't know which one is the winner of the best shows in Las Vegas in 2021 in the male dance genre! Hot bodies, very very hot. Dancing may need a bit more synchronizing, but we don't go there to see synchronicity - we have the Bellagio Fountains for that, right? Perhaps the main difference between Chippendales and Thunder From Down Under is that in Chippendales the sexy men are more...varied!

There are quite a few impersonator shows in Las Vegas, and even city tours conducted by impersonators. You can catch a show with anyone from Marilyn Monroe to Elvis to Britney Spears! However, the best show in Las Vegas in 2021 in the impersonator genre is Vegas! The Show ! 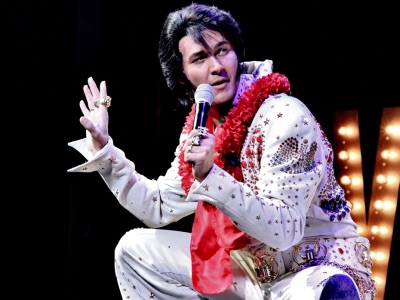 Where: V Theater at Planet Hollywood

If you missed the King while he was alive then the best show in Las Vegas to watch is All Shook Up. This tribute show to Elvis will have you putting on your Blue Suede Shoes and swooning in your seat as you watch Elvis gyrate his hips on stage. Everyone in the audience will have Suspicious Minds that Elvis is still alive while they are listening to classics like Heartbreak Hotel, Hound Dog and Love Me Tender. 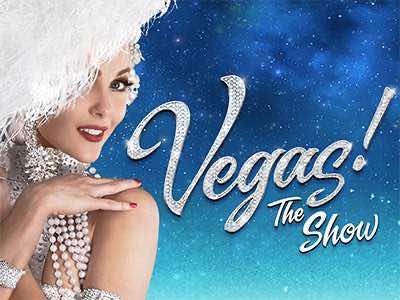 Review: VEGAS! The Show recreates important moments from the history of Las Vegas through musical performances. The show takes you back in time into the 50's and features impersonations of the top performers who helped shape Las Vegas - Elvis Presley, Rat Pack, Tina Turner and others. It's one of the best shows in Las Vegas in the impersonator genre!

Do you enjoy illusions, magic tricks and mind-blowing hypnotic shows? Among the enormous multitude of shows, I have selected several best shows in Las Vegas in the magic genre! But remember - although magic shows are usually associated with childhood, some of these shows are not for children's eyes and ears at all! Keep an eye on the age restrictions to know what you are in for. 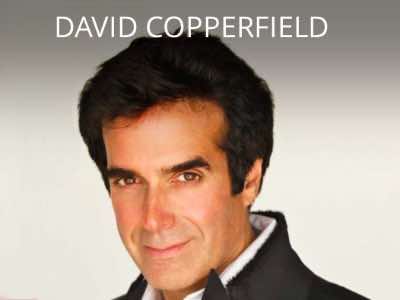 The magical king of illusion is once again gracing the stage in Sin City. David Copperfield brings one of the best shows in Las Vegas for you to witness which is filled with unbelievable illusions that will blow your mind into the next galaxy. Imagine being levitated in the air, walking through a wall or seeing an automobile disappear right in front of your eyes. The action during the performance is high-powered with numerous twists and turns to every illusion that will leave your mind in chaos for days. 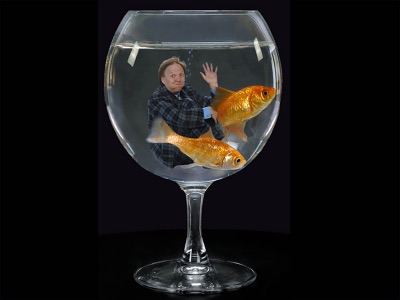 Where: The Theater at Harrah's

A great way to spend an afternoon laughing while watching one of the best shows in Las Vegas on the Strip in 2021 is to go see Mac King Comedy Magic. Performing in the Main Showroom at Harrah’s this all ages show is ideal for families, groups, and people looking to relax and laugh during the day. Mac King is legendary for his Southern charm that brings a mixture of magic and jokes to the stage which has audiences in awe of his powers. His 75-minute show includes everything from hand shadow puppets and rope tricks to vanishing goldfish and guinea pigs to sleight of hand tricks and he throws in a few impersonations of Sin City legends like Elvis and Liberace. He has a great stage presence with plenty of audience participation which has made him the longest running magician in Las Vegas.

These shows are not your regular hypnosis (if that can be regular!) - they are simply hilarious, and very, very adult. The masters of hypnosis make volunteers do and say stuff they would never, ever dare to do in their real life by making them lose their natural inhibitions. This offers the audience who is not hypnotized plenty of opportunities to laugh! 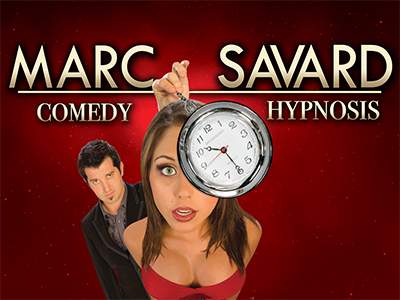 Review: Marc Savard's hypnosis show is one of the most hilarious, very adult-oriented best shows in Las Vegas to go to for some laughs in 2021. In this show, Marc Savard hypnotizes volunteers from the audience and makes them do very funny and inappropriate things they would never do in real life. I would actually love to volunteer next time I see his show!

In all honesty, Las Vegas is not very child-oriented city, but you probably already know that! There are, however, a few very good shows you could take your children to - for example, most of Cirque du Soleil shows are quite appropriate for children. And here are a few more best shows in Las Vegas that your little ones will definitely enjoy! 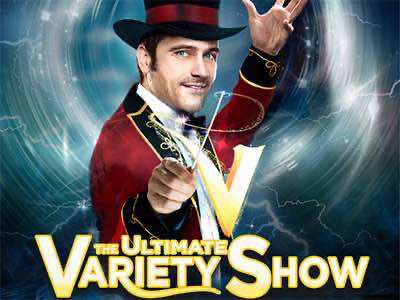 Review: V-the Ultimate Variety features artists performing magic tricks, stand up comedy, stunts and more. This is clean version of the adult show Absinthe, and it's pretty much circus-like. While I wouldn't recommend to watch this show on your own or with kids older than, let's say 7, but if you have little kids ages 2 to 5, it's pretty much one of the best shows in Las Vegas for kids. 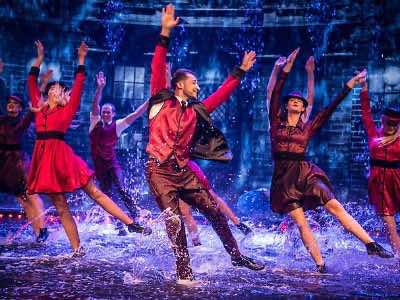 If you thought Vaudeville performances were not in the vogue then you need to see WOW-The Vegas Spectacular which is one of the best shows in Las Vegas that highlights everything that has made Sin City the Entertainment Capital of the World. Performing at the Rio Showroom in the Rio, the show is packed with whimsical acts and great artists. Don’t be surprised when you witness incredible contortionists, flying acrobatic artists that defy gravity, and plenty of confetti filled cannons blasting the stage. There is fabulous 3-D multi-media effects combined with superb costumes and choreography that brings all of your senses back to life. The unique water stage is ideal for the numerous artists to highlight their skills right in front of your eyes as the whacky MC brings the audience to smiles and laughter of tears. This is a must see show for fun filled entertainment Vaudeville style.