The Rat Pack Is Back! Las Vegas Show Tickets

The Rat Pack Is Back! Las Vegas is a wonderful tribute concert and walk down memory lane of the fabulous Rat Pack.

Legendary Las Vegas producer Dick Feeney has put together another winner that brings back to life this fabulous group of performers. The tribute artists are realistic in appearance and mannerism of each member that is portrayed from the Rat Pack portray. The intimate setting that the Copa Room at Tuscany Suites and Casino is ideal for guests to get a real feel of an authentic Las Vegas lounge show of yesteryear.

The Rat Pack is Back! begins with a custodian appearing on stage with a broom. All the time the janitor is sweeping, he is talking about the good old days of Las Vegas entertainment. Suddenly the stage explodes into excitement when a twelve piece orchestra starts up with some lively music. As the show progresses each Rat Pack tribute artist of the evening has a solo portion of the show that includes several songs. Don’t be surprised if Dean wows the women with That’s Amore, Drink to Me with Thine Eyes and Ain’t That a Kick in the Head. Sammy Davis Jr. may break out with Mr. Bojangles or Candy Man. Frank likes to get in the act with versions of Fly Me to the Moon and My Way. Sammy and Frank have been known to perform a stirring duo of Me and My Shadow or guests can expect a Sammy and Dean duet of What Kind of Fool Am I or perhaps That Old Black Magic. Guests can also expect the tribute artists to reunite on the stage for their finale, where they might sing a snappy rendition of Luck Be a Lady, New York New York or Lady is a Tramp. 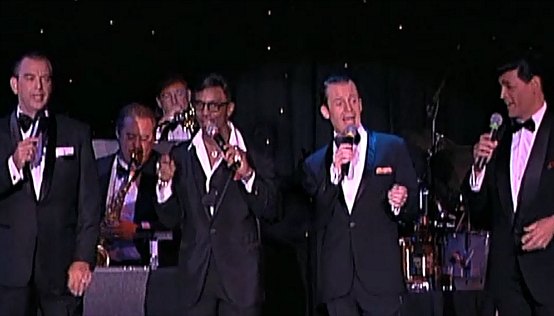 The show includes a steady inflow of off the collar jokes by many of the tribute artists. Sammy likes to point out that he is part Puerto Rican, Jewish and of course black. Dean points out that he is on a whiskey diet and that he has lost four days this week. Everything seems to work in this tribute show. Dean was famous for years for his off color liquor jokes and if you are lucky there might be an appearance by Joey Bishop who can add to the tom foolery. Patrons will have fond memories of the evening as the tribute artists roll through such hits as guests are leaving the Copa Showroom.

The Copa Showroom is the perfect venue for such a tribute concert of such great artists. The intimate feeling within the showroom is superb and will remind guests of returning to the Sands in the 1960s to listen to the Rat Pack. Guests can also indulge in a three course price-fix meal option at the Garden Café which includes cuisine selections for vegetarians and meat lovers.

No matter which tribute artist is performing you can be guaranteed that Feeney has full confidence in the various impersonators dedication to be the best The Rat Pack Is Back! tribute show. 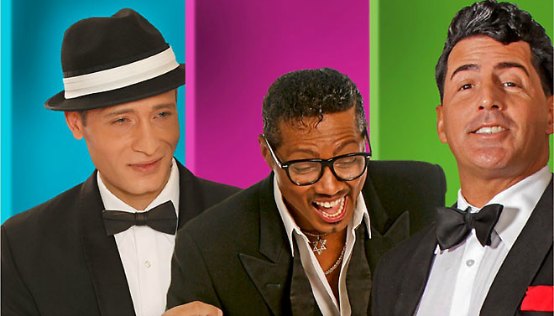 The masterminds behind The Rat Pack is Back! is Las Vegas famed producer Dick Feeney who teams with musical arranger David Perrico which are performed by Lon Bronson’s twelve piece orchestra.

The cast of the Rat Pack Is Back! rotates and varies with such tribute artists as Brian Duprey, David DeCosta or Nick E’Egidio portraying Frank Sinatra; Drew Anthony has a similar appearance to a younger Dean Martin; Kyle Diamond or Kenny Jones can play an intriguing Sammy Davis Jr. Originally Jeff Applebaum and Sandy Hackett portrayed Joey Bishop and their appearance during the show may vary from time to time. 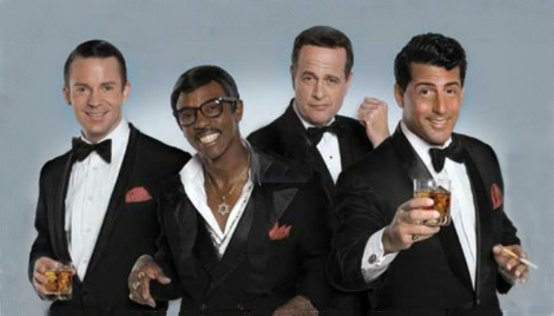 The show is performing at the Copa Room located within Tuscany Suites and Casino. The venue has good sight lines from all seating areas and the position of the stage enhances the intimate feeling. There are plenty of VIP seats located closer to the front. The show is open to patrons twelve years of age or older. There is a dinner package available for an additional charge that includes a three course price-fix meal at the Gardens Café. The show runs Monday through Saturday at 7:30 P.M. Rat Pack Tickets are on sale now and range from general reserved seated to VIP seating experience.