Zombie Burlesque Las Vegas is one of the most fascinating sexy comedies on the Strip. It's performed at the V Theater within the Miracle Mile located at the Planet Hollywood complex.

Zombie Burlesque is not your usual zombie experience such as the Walking Dead or Dawn of the Dead with wandering zombies eating and killing people. These zombies on stage are filled with a lustful fun attitude that mixes punchlines with sexy zombies. The Zombie Burlesque show brings to life the debauchery that might exist in the underworld for zombies as they wander the theater eyeing prospective candidates to join them on stage. 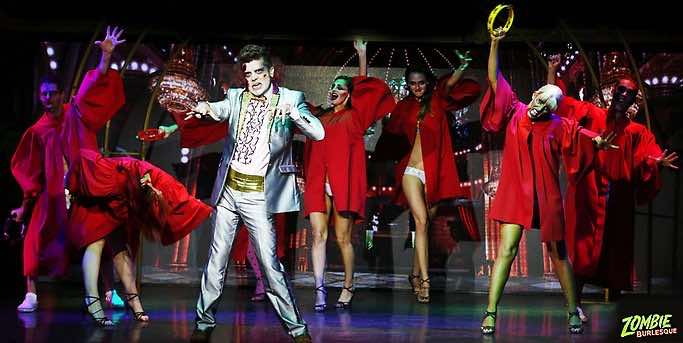 Zombie Burlesque is an adorable comedy of the undead that includes variety acts, burlesque dancers and a live big band that adds an extra punch to the show. The show is set in the 1950s era where the undead zombies of the world have made a deal with the President of the United States in order to coexist with the remaining living population. The peace deal created is centered on the promise that the living would turn over the most evil living people in the world to the undead zombies for disposal. The zombies in a show of support decided to open up the famous Club Z to the living.

Zombie Burlesque is presented by David Saxe who has brought other big Las Vegas shows to the Strip like Vegas! The Show. The setting for Club Z is the intimate V Theater that seats 200 or so people. The intimate theater is ideal for Zombie Burlesque to engage with the audience on many skits and comedy acts during the show. Club Z might be the most risqué adult zombie club in the world and guests will be pleased by the excellent artists performing their undead comedy act. The choreography is astounding with numerous makeup artists and wardrobe assistants to help the zombies find their right undead look. 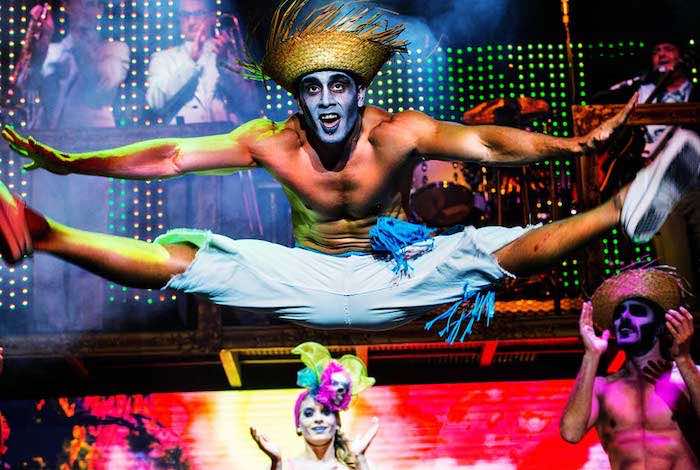 Some of the performers are fashioned after classic horror movie characters of the mid-twentieth century such as Boris Karloff and other skits feature artists like Desi Arnaz, Sophia Loren as well as Elizabeth Taylor. One of the most hilarious skits is performed by Tiny Bubbles who is dressed in drag costumes from a nun to school teacher. Other portions of the show include a stunning zombie ballet dance to the Cranberries song called Zombie. Another highlight is the zombie body shaking to Michael Jackson’s Thriller. From the start to finish Zombie Burlesque brings the human anatomy into play. Many times throughout the show the artists are looking for prime flesh in many different shapes and forms. Once the zombies enter the audience, guests will enjoy the hilarious sexual overture of the comedy. The audience will also be amazed by the many acrobatic moves that the zombies perform, whether dancing or flying high in air. 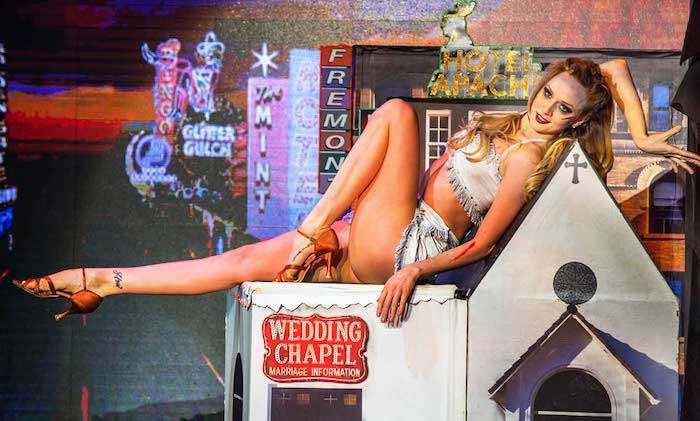 When the show is over guests will be pleased to find out that they can enter the living world again without being eaten. Zombie Burlesque Las Vegas is an entertaining comedy that will satisfy anyone’s taste for a peak into the underworld. 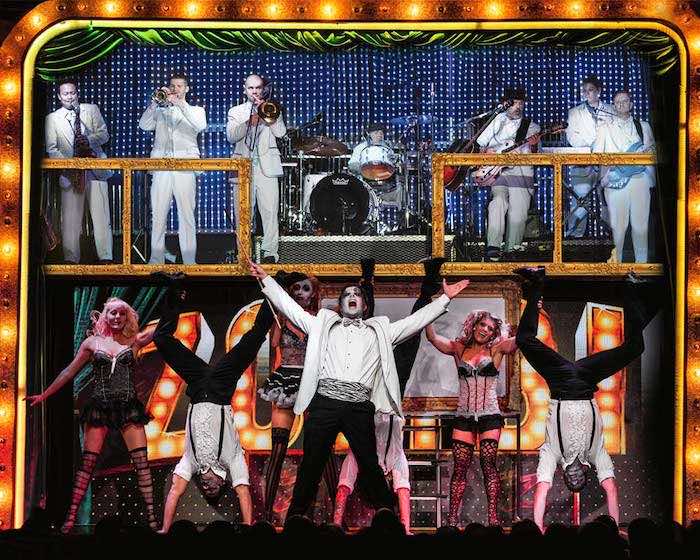 Zombie Burlesque has a cast of eleven undead and quite talented artists. The heart behind the show is acclaimed producer/writer David Saxe. Since birth, David has had Las Vegas entertainment in his blood. His parents were both performers on the Strip with his father playing with the original Rat Pack and his mother an accomplished dancer. David has been producing shows on the Strip since he was 17 years old and is credited with such hits as Vegas! The Show and V-the Ultimate Variety Show.

Zenoch is the high energy emcee that moves the stage show through the various skits while providing eclectic standup comedy.

Lola Gangrene is one of the hottest undead people you will meet. Lola is not afraid to show her love of audience members whether she is looking for a mate or for meat.

Sophia LaMorte is a dynamic zombie singer that will take your heart with her fantastic voice. Sophia has a sultry look that is enhanced by the burlesque style show.

Deadi Arnaz is as funny as undead people can be. Deadi has the personality of a man on a mission trying to find his perfect place in the living world.

Turf is like no other undead being when he starts to twist his body into non-human shapes and figures. Turf has a knack for having guests in bewilderment with his moves.

Tiny Bubbles is proud to be the only undead oversized drag queen. Tiny has an old-school feeling about his standup comedy, whether straight forward or raunchy in nature. 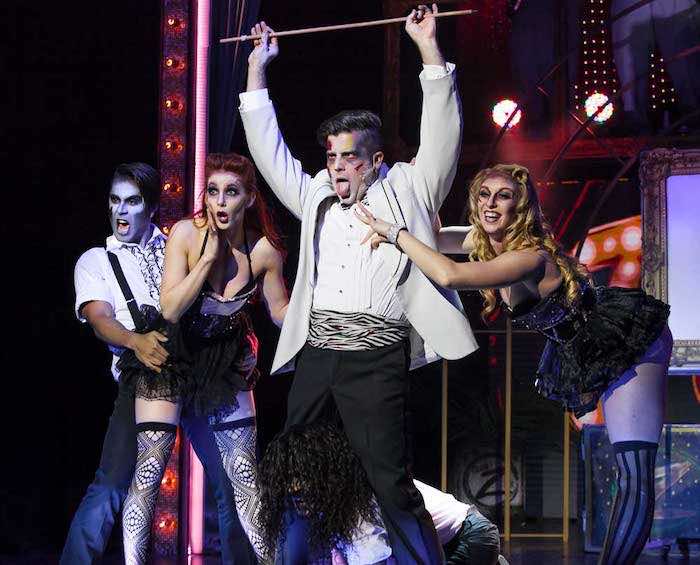 Johnny Wifemauller is the resident bad boy. Johnny is ready to maul the living and he likes to lure his prey into a trap of sexy make believe.

Elizabeth Terror is the beauty with red hair. Elizabeth is the most accomplished undead dancer in the show and she can be quite the temptress of love too.

Carvin Miranda has a taste for being a practical joker with Zenoch. Carvin also performs heart defying acrobatic moves that would leave many of the living in a dead state.

Ann Margrott is a gorgeous undead being that is absolutely stunning. Ann can dance the night away with her long legs and then catch her next victim with them.

Mikey portrays an unbelievable, unthinking and undead athletic jock. Mikey is always on the lookout for a quick snack of meat and there is no living woman safe from his allure. 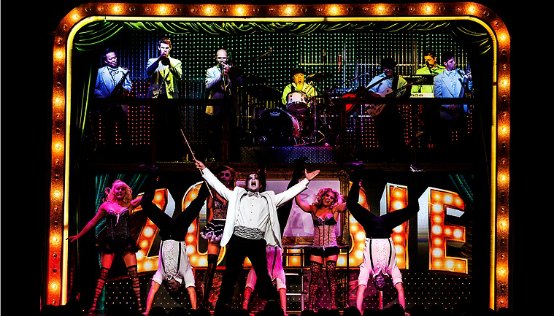 Zombie Burlesque Las Vegas is being performed at the intimate 200 seat V Theater that is situated within the Miracle Mile of the Planet Hollywood Hotel. Zombie Burlesque is open to all ages but there is a fair amount of sexually oriented comedy during the show. The show appears Monday through Saturday and starts at 8:30 P.M. Zombie Burlesque Tickets are on sale with a choice of General Admission and Dinner + ticket special with VIP seating.