Atomic Saloon Las Vegas show playing at the Venetian is one of the best show to hit the Strip in years. It is sexy, funny, and full of interesting acrobatics. The show brings together plenty of entertainment that at times is not for the faint hearted but rather for an adventurous audience that is ready to take the days of the Wild West and combine them with the atomic days of Sin City.

Atomic Saloon Las Vegas is another stellar creation from Spiegelworld, the same people that brought you Absinthe and Opium which have been mainstays on the Strip since they both opened several years ago. Their new show has something for everyone to enjoy like sexy people dancing, funny comedians, incredible acrobats, and flying aerialists that defy the laws of gravity and common sense. 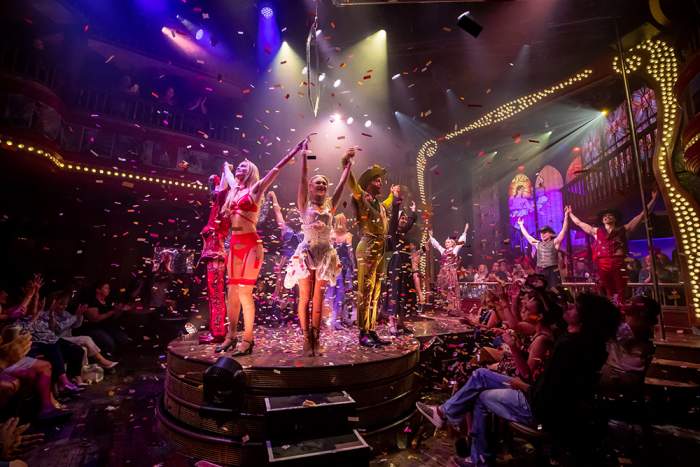 Just like other Spiegelworld productions the audience is greeted at the beginning by the host who in this case is Boozy Skunkton. She is first introduced on stage by a profanity-laced singing cowboy named Blues Jackson who sets the tone for a raucous night of fun. Skunkton is the perfect host during the show with gorgeous looks, a bright smile, and an evil attitude of fun that is projected throughout the show.

From here the fun begins with numerous skits that combine the wittiness of an old west saloon that is transformed over time by the atomic testing in the region. There are plenty of downright funny scenes during the Atomic Saloon Las Vegas show like two nuns who are not necessarily worthy of wearing the cloth but can pole dance, sing, and defy gravity with their aerial displays. When Reverend Peabody tries to reign in Boozy Skunkton with his nuns he is in for a surprise when the nuns turn on the reverend with a skit that gets raunchier and funnier as the nuns spit out ping pong balls at the naïve audience.

You can expect to see death defying acrobatics too from impressive gymnastic moves to stellar one hand handstands while you watch in awe of the shear strength of the performers on stage. The dancing and singing is highly choreographed allowing for individuals to follow directions or set their own tune during a mini-rant filled with topics that will leave your cheeks red from blushing.

The show is set in fantastic venue that is intimate and designed after an old saloon in the Wild West. The setting is perfect for bringing the audience into play during the performance with the actors only inches or feet away from the crowd that routinely is amazed with the high energy production.

After watching this intensely funny, sexy, and entertaining show you will probably think of the classic movie Blazing Saddles that brought all of the above onto the big screen. But the Atomic Saloon Las Vegas show is more than just Blazing Saddles on steroids. The show is about having fun in such a way that makes people smile, laugh about the off-the-cuff humor, and be amazed by the incredible strength of the acrobats and aerial artists.

The cast of Atomic Saloon Las Vegas show has been put together by Spiegelworld and combines plenty of talented people on stage. The show is directed by Cal McCrystal who brought to life Absinthe and Opium and founder of Spiegelworld Ross Mollison plays a big role in casting decisions.

The characters of the Atomic Saloon include Saloon Owner Boozy Skunkton is played by Petra Massey. Birdie and Paddy O’Skunkton are played by Suzanne Cleary and Peter Harding. Blue Jackson the Singing Cowboy is portrayed by Colin Cahill. Reverend Peabody is played by Damien Warren-Smith. The Mayor is Pavel Stankevich. Sweet Cheeks is portrayed by Alina Shpynova. Acrobatics are performed by the Abdominal Outlaw also known as David Zongoli from Italy who was a finalist on Spain’s Got Talent in 2018.

The show is performing at the Kraken Music Hall within the Grand Canal Shoppes at the Venetian. The 250-seat venue is designed after an Old West saloon and gambling hall which allows the audience incredible sight views and opportunities for interaction with the cast. The 90-minute adult-friendly show is open to all people 18 years of age or older. Performances run Monday and Tuesday at 8:00 P.M. and Thursday through Sunday at 7:30 and 10:00 P.M. General admission and reserved seating is available in four categories for Atomic Saloon Las Vegas show which include VIP booth seats with a meet and greet opportunity.