If you thought the King was dead, then you need to surprise yourself and go watch the scintillating Las Vegas tribute show to Elvis Presley named The Spirit of the King. Performing as the King, Steve Connolly is masterful as he graces the stage crooning out the King’s greatest songs in a show that is highly choreographed as only Elvis would have done.

The show is truly a gem and traces the life of Elvis Presley from his early years of Gospel singing to his later years of delving into the more rambunctious world of rock-n-roll in the later 1960s. When Connolly first walks out on stage the audience is amazed at the appearance

which is a remarkable resemblance of Elvis in his early days. After cutting through a few songs from the 1950s like Heartbreak Hotel, Blue Suede Shoes and You Ain’t Nothing But a Hound Dog, Connolly is dressed in a perfect gold sequinned suit with beautiful penny loafers that dance gracefully to the music of the King. 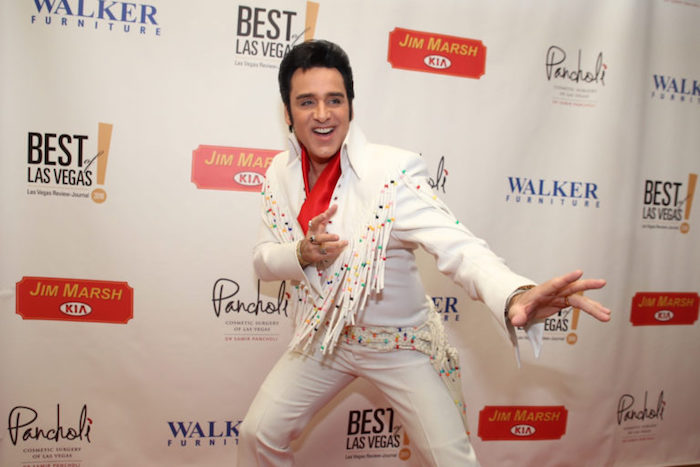 As he sways his hips, the crowd goes wild as Connolly is spot on in voice and the stage presence of the King. At one point during the performance Connolly runs through an acoustical set which includes a masterful Love Me Tender with Connolly playing guitar.

During the performance there are a couple of costume changes that has Connolly wearing a black leather suit to Elvis’s signature cape that was popular from his 1968 NBC special. Throughout the show Connolly brings the audience into play with commentary about Elvis’s life that makes patrons feel like he is only talking with them about the private life of the King.

When the curtain finally closes, Connolly comes out of the darkness to meet and greet all guests who have attended the show which adds value to a night of fun and music presented by the King.

Steve Connolly was born on the East Coast and has truly honed his skills when it comes to impersonating Elvis Presley. Connolly who previously fronted a heavy metal band that was influenced by Led Zeppelin has taken years to complete his transformation to Elvis. His stage career in Las Vegas began in 1999/2000 with his tribute show to the King at Bally’s. Since that time he has performed over 6,000 shows in Sin City as Elvis Presley as well as numerous locations around the world that include China, Korea, Mexico, Australia and Russia.

The Spirit of the King is playing at the intimate 250 seat Canyon Club. The cabaret style theater boasts good sight lines and acoustic from most seats. General admission tickets are first come first seated, so you might think of getting in line a half-hour early for close up seats. VIP tickets allow for skip the line and a good chance at front row seats. All guests have a chance at a meet and greet after show which is an added bonus.

The Spirit of the King is performing at the Canyon Club within the Four Queens Hotel and Casino. The 7-minute show runs Tuesday through Saturday starting at 9:00 P.M. Ticket holders must be 13 years of age or older to attend. General admission and VIP tickets are available.